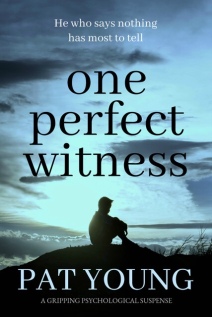 On a remote Scottish hillside, three paths meet. On each path, a boy, one carrying a gun.
When their paths cross, a shot is fired and a boy dies.
That leaves two – one killer and one perfect witness.
This killer will stop at nothing to make sure the witness says nothing. Difficult for most people, even for someone who’s been guarding a secret of his own for five years.
What if the witness decides he’s been silent too long? Sometimes even the unspeakable must be spoken, if we can find the words.

Someone’s standing on the path, watching me.
I curl into a ball. In case he’s got a dog. Saw a hedgehog do that once, when it was frightened. It worked. The dog lost interest and walked away.
I stop breathing. Keep my eyes shut tight. Try not to twitch the tiniest muscle. Pray he hasn’t seen me.
Dead bracken whispers near my ear. My nose is so near the ground I can smell the earth. Think I might sneeze. I let out my breath a tiny little bit at a time but it still sounds loud as thunder.
Another few minutes pass, or maybe it’s just moments.
‘Hey, kid. You okay?’
When I don’t answer he says, ‘What you doing out here on your own at this time of the morning? You should be tucked up in bed.’
My legs are trembling, my hands too. I curl up tighter. Squeeze my knees to my chest so hard I can hardly breathe.
‘Come on. Up you get.’
I don’t move.
‘Hey, listen. You need to get up. You can’t lie there.’
I slowly raise my head. I see a face with wide, hairy nostrils and eyes that bulge as he leans towards me. His breath reminds me of the old dog Pops had when I was small.
The man touches my elbow and I flinch away from his hand. The bad memory’s so strong my stomach feels like I’m falling down a flume.
‘Easy, buddy, easy.’ He takes a step away from me. Holds his hands up like he’s under arrest.
I have to stand up and show him I’m not afraid. I crawl out and get to my feet, trying to hide the gun behind me.
‘Playing cowboys?’
He waits, as if he expects me to say something.
‘All by yourself?
My legs are shaking. Wish I had long trousers on to hide them.
‘You lost or something?’
I shake my head.
‘Come on over here. Don’t be scared. I won’t hurt you.’
That’s what Robbie said.
Inside my head, something snaps. I feel full of courage. I look the stranger right in the eye and bring the gun from behind my back.
‘Going to give me a look at your gun? Cool.’ He holds out his hand. ‘Hand it over, then.’
I don’t hand it over. I snap it shut, like I’ve seen Dad do. I smell metal and oil as the mechanism locks into place.
‘Shit! That doesn’t sound like a toy. Is it some kind of replica?’ He holds out his arms this time. ‘Can I see it, please?’ He smiles as if he expects me to just do as he says.
Without taking my eyes off him, I slowly raise the gun. Till it’s pointing at his chest. The smile slides from his face like slime off a stick. He moves away from me. A branch catches the back of his leg and he stumbles. I raise the rifle a little more. Settle it against my shoulder. Copying Dad. It feels so heavy I think my legs might buckle, but I don’t feel a bit afraid. I feel powerful.
I rest my cheek on the gun. Make a show of placing my finger on the trigger.
He starts to scramble through the gorse, backwards. His eyes never leaving my face. The thorns snag his shirt but he doesn’t seem to notice. Suddenly he stops and stands with his hands in the air.
‘Take it easy, kid. Watch what you’re doing with that thing.’ His voice sounds kind of wavery. ‘Put it down now, please. The joke’s over. You’ve had your fun.’
I want him to keep going. Run. Get away from me.
He doesn’t move. Well, just his arm. He stretches it out towards me, in slow motion. ‘Come on,’ he says, very quietly, coaxing. ‘Just do what I tell you and you won’t get hurt.’
Like the last time.
I stare at him. Right down the barrel. Slowly, very slowly, I shake my head. Then I pull the trigger. 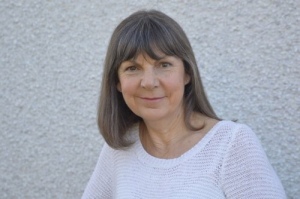 Pat never expected to be a writer. Then she found a discarded book with a wad of cash tucked in the flyleaf. ‘What if something awful happened to the person who lost this book?’ she thought, and she was off.

Pat knew nothing of writing, but she knew a thing or two about books, having studied English, French and German at Glasgow University. A passion for languages led to a career she loved and then a successful part-time business that allowed her some free-time, at last.

Pat had plans, none of which included sitting at her desk from daybreak till dusk. But some days she has to. Because there’s a story to be told. And when it’s done, she can go out to play. On zip-wires and abseil ropes, or just the tennis court.

Pat writes psychological thrillers. Her debut novel Till the Dust Settles, has been awarded the Scottish Association of Writers’ Constable Stag trophy. Following publication in July

Pat was delighted to be chosen as an ‘emerging talent’ for Crime in the Spotlight and read from Till the Dust Settles to an audience at Bloody Scotland – another dream come true.

Published by Bloodhound Books, I Know Where You Live is the much-anticipated sequel to Pat’s gripping and unmissable debut thriller, Till the Dust Settles. It too is a psychological thriller with a skillfully told story that makes for an enjoyable stand alone read. It will hook you from the start.

One Perfect Witness, Pat’s third novel to be published, tells a completely new story. If, like Pat, you’re fascinated by what happens when someone disappears, you’ll enjoy this book of secrets, lies and deception.