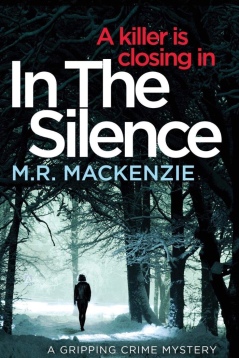 When Anna, a criminology lecturer, does return to Glasgow from Rome, during the coldest winter in memory, tragedy strikes. While out with her best friend from school, Anna has a chance encounter with a former flame, Andrew, and later that night discovers Andrew stabbed and dying on a blanket of snow. Soon Anna finds herself at the centre of the investigation as the star witness for the police, and embarks on investigating the case herself. But Anna doesn’t realise the danger she is in and soon finds herself in trouble. When another body shows up, who has links to the first victim, it appears that the motive may lie buried in the past.

As Anna gets closer to the truth, the killer starts closing in. But can she solve the gruesome mystery before the killer strikes again?

Atmospheric and intriguing, In The Silence is a read that slowly pulls you into its grip, taking its time to wrap itself around your curiosity and make you want to dig deeper into the story.

Soaking you up in an easy feeling of the real nature of Glasgow, and especially considering Mackenzies’ use of native Scottish speech, you’ll feel fully enveloped in the whole story, as it unfolds before you.

I found the characters of Anna and Zoe both addictive and yet annoying, swinging between like and dislike of each, often, always a sign to me of a well written persona.

A mesmerising debut, it’s well worth reading and I’m certainly going to be looking out for more from this author.

One thought on “#blogtour In The Silence by M R Mackenzie”