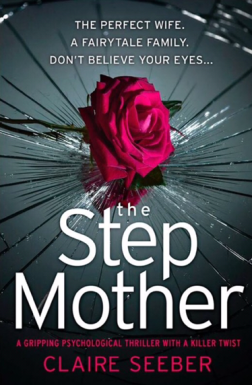 Jeanie and Matthew are a happily married couple who both have teenage children from previous relationships.

No one said it would be easy to raise a blended family under one roof but Jeanie and Matthew are strong. They will make it work.

And whilst Jeanie’s step-daughter Scarlett rejects her, Jeanie will just have to try harder to win her over.

But Jeanie has a past. A terrible secret she thought she’d buried a long time ago. And now, it’s coming to the surface, threatening to destroy her new marriage.

Someone is playing a terrifying game on Jeanie and she must put a stop to it once and for all.
After all, a fairytale needs a happy ending… doesn’t it?

As an unofficial (but officially as of next year) step mother I’m always keen to read novels about blended families, as whilst my own situation has been an easy one to accept due to the age of my fiancé’s son when we met, it’s still a subject close to my heart. So when I was offered an advance copy of The Step-Mother, the latest novel by an author of whom I have long been an admirer, I accepted it with glee.

As I said I’ve been an admirer of Claire Seeber’s novels for a long time, but have to say that The Step-Mother is a fantastic step up in her skills, and deserving of all the advance praise I have been seeing on GoodReads, and from other reviewers.  I was hooked from the very beginning, and immediately all I wanted for Jeanie was the happy ending she was desperate for.

Told alternately between the narratives of Jeanie and her sister Marlena, it is an ingenious web of intrigue, so cleverly and intricately plotted that you’ll constantly change your mind as you who is up to no good, go through just about every possible culprit and still be left guessing by the end of it all.

What I enjoyed most about this novel was the profound emotional response I felt towards the characters as I was reading.  I wanted to scream at Matthew for being a useless dick, shout at her sister for being to wrapped up in her own problems, and felt every moment of shock, fear and helplessness of Jeanie as her happy ever after unraveled before her.

It’s a gem of a book that I read in just two sittings, and that was only because I had to go to bed.  It’s highly recommended by me.