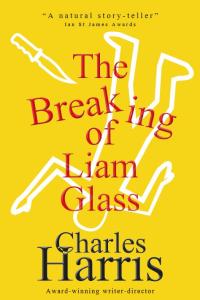 ‘Every day’s newspaper starts empty of ideas – and some of them stay that way.’

It was like they weren’t there. Millions of Londoners streamed past the Gordon Road Estates every twenty-four hours, in their cars, buses and trains, but they didn’t see them; as if they were invisible, easily ignored. A mixed-up part of town, full of mixed-up people, where nothing much ever happened. Squeezed between the rich glamour of Regent’s Park, the neon buzz of central London and the squat seriousness of Euston. High-rise blocks towered over low ones; pensioners scratched along next to smart-casual media consultants; bankers in Reiss suits lived beside teenage gangsters in shades. If you parked your car next to one of the little squares, you didn’t know if you were going to come back and find a glossy leaflet for Hatha Yoga under the wipers, or the wheels gone and the car up on bricks.

But something was about to happen tonight.

Liam Glass was waiting angrily in the dark outside his front door on one of the first-floor walkways – shuffling from one foot to another, hunched into his hoodie, waiting, waiting, waiting; waiting for his mum, who was inside, searching endlessly through drawers and bags. He shivered as a dankness rose from the concrete and the road below glistened like fire under the street lights. A Tory election leaflet had been shoved half through their letterbox. He pulled it out and scanned it, frowning in concentration.

Katrina finally arrived with her debit card and a bustle of urgency.

‘So as you remember the PIN number,’ she said, holding out a scrap of paper. She thought he was still a kid.

He took the card, but not the note with the PIN, and turned away, grumpily.

‘You’ll forget!’ she called. But he was already stomping off down the steps.

Of course, he was just a kid, but not to himself. Tall for his age. Hormones rising. Ready to fight for his place in the world. Down he went, into Gordon Road, down the hard-lit electric canyons like he was in the Wild West. And full of his own thoughts: football matches played and unplayed, Xbox games waiting, friends, Shay Begum and Zen Methercroft, Facebook, Instagram, real girls from school, naked women on websites he thought Katrina didn’t know he knew…

He passed Royland Pinkersleigh, who was rhythmically flailing around with a rag and soap suds, swabbing down the wall outside his little gym, All Roads Lead to Royland. Royland flailed faster, trying not to think of all his problems, trying not to think of his partner Sadé in the tiny gym office, wrestling with the accounts. Sadé, who would be only too pleased to remind him about their debts as soon as he went back inside. Royland half glanced at Liam, thought he’d seen him before but couldn’t remember where, then applied himself to the rag and bucket once more.

Jamila was distracted, thinking about the art-gallery opening she was already late for – and she the guest of honour as the local councillor. At the last moment, she swerved and missed him. She hooted, but Liam hardly heard above the tick-tick-oomp-oomp of the music playing out of his earphones. She hooted again as she sped away from him, desperately composing the speech she was supposed to be making to the assembled art lovers and local journalists in fifteen minutes’ time.

Liam trotted past Jason Crowthorne, chief reporter of the Camden Herald, who hardly noticed him in the dark, saw him and didn’t see him, just another hoodie, shoulders hunched, round faced, ear buds in his ears, staring at the phone in his hand.

An hour before, Jason had turned twenty-nine, but he’d kept it to himself and had merely stolen a Twix from the vending machine in the newsroom. He didn’t like sharing personal grief.

Now he locked his car and shivered in the cold April breeze. He turned away from Liam, who was ambling down the road in the other direction.

Didn’t see either, as the others hadn’t, the two dark shapes following.

With London knife crime now on the rise, this is not so much a whodunnit as a blackly comic what-they-did-after-it satire, that resonates in a timely way.

Teenage footballer Liam Glass is stabbed on an estate next to London’s Regents Park and, with an eye to the main chance, journalist Jason Crowthorne sets out to make the most of the story and build a crusade against teenage knife-crime.

In the following 24 hours, Jason creates his campaign, hiding a scoop from rival journalists and avoiding arrest. But other powerful figures are determined to exploit the boy’s story as much as they can, and they have fewer scruples! Liam Glass is a darkly satirical look at the deep splits in modern communities, asking deep moral questions in a sympathetic and humorous way.