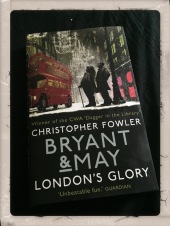 The latest instalment in Christopher Fowlers brilliant Bryant & May series is out now.  London’s Glory is a collection of eleven Bryant and May short stories, filling in gaps and covering cases mentioned in passing over the years.

In the spirit and brevity of a short story, when I got the chance to ask a few questions of Chris, I asked simply, about the genesis of Bryant & May, where in London fans could visit for a feel of the books, and what Bryant and May would think of book tours and blogging.  Here’s what he had to say. 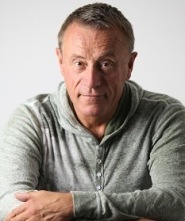 Many years ago I fell in love with the Golden Age classic mysteries I found in the library, with their academic eccentricities and timeless view of an England that never really existed. There was just one problem; they badly needed an update because of outmoded attitudes to sex and race. I thought; wouldn’t it be interesting if you took the structure of the Golden Age mysteries and put them into our recognisable modern world?

If you’re going to describe the investigation of a crime, you might as well have fun with it. How does a writer create a detective? I started with a matchbox label that read “Bryant & May – England’s Glory”. That gave me their names, their nationality, and something vague and appealing, the sense of an institution with roots in London’s sooty past. London would be the third character; not the tourist city of guidebooks but the city of invisible societies, hidden parks and drunken theatricals, the increasingly endangered species I eagerly show to friends when they visit.

Every night, my detectives walk across Waterloo Bridge and share ideas, because a city’s skyline is best sensed along the edges of its river, and London’s has changed dramatically in less than a decade, with the broken spire of the Shard and the great ferris wheel of the London Eye lending it a raffish fairground feel.

By making Bryant & May old I could have them simultaneously behave like experienced adults and immature children. Bryant, I knew, came from Whitechapel and was academic, esoteric, eccentric, bad-tempered and myopic. He would wear a hearing aid and false teeth, and use a walking stick. A proud Luddite, he was antisocial, rude, miserable, erudite, bookish, while his John May was born in Vauxhall, taller, fitter, more charming, friendlier, a little more modern, techno-literate, and a bit of a ladies’ man. Their inevitable clash of working methods often causes cases to take wrong turns.

Then I threw every modern subject I could think of at them, from refugees to banking scandals, and let them sort out the dramas using old-fashioned (and vaguely illegal) methods. The result is, well, unusual!

The easiest locations to visit in the books are Waterloo Bridge, where the detectives walk most nights, and King’s Cross, where their unit is based, but in ‘The Victoria Vanishes’ there’s a list of all the pubs they visit in the books at the back. And all of the locations I use are real, so everything can be looked up and explored on Google maps!

I think John May would like blogging but Arthur Bryant would probably crash entire systems because he has a warped understanding of the internet!