When a man plummets to his death from a balcony at York races, his wife and brother become suspects in a murder enquiry. Meanwhile Richard is being stalked by a killer issuing death threats. Richard is reluctant to go to the police, for fear his own dark secret will be exposed. Newly promoted Detective Inspector Ian Peterson is investigating the death at the races when a woman’s body is discovered. Shortly after that, Richard is killed. With the body count increasing, the pressure mounts for his team to solve the crimes quickly. But the killer is following the investigation far more keenly than Ian realises and time is running out as the case suddenly gets a lot closer to home…

Race To Death is the second outing as a main lead for DI Ian Peterson, a character that appeared originally in the first three Geraldine Steel books by the same author.  In Race To Death he has recently accepted a promotion from DS to DI which involves moving hundreds of miles from his current home to the city of York.  This move is just one of the things I enjoyed about Race To Death, as a new location and new colleagues means the chance to get to know a whole host of new characters making this a new start for the reader as well as the protagonist.

With a wife already unhappy with the demands of ‘the job’ on his time and as yet unsettled in their new home, under pressure from a boss he is struggling to find common ground with and a murder case leading to nothing but dead ends, DI Peterson has his work cut out.  Out to impress he is determined to do what it takes to find the killer.  Russell has written these new relationships well so it is easy to identify with the characters as they settle into their new routines. 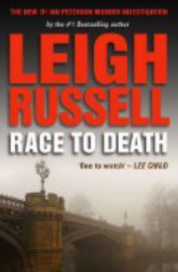 The plot has more than enough false leads to keep you guessing to the very end. It throws you straight into the action, and the tempo continues at a steady beat throughout ensuring you won’t want to put it down until you know whodunit.

All in all it’s a riveting read and I’m really looking forward to finding out what’s next for DI Peterson.

One thought on “Race To Death – Leigh Russell”