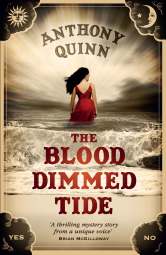 London at the dawn of 1918 and Ireland’s most famous literary figure, WB Yeats, is immersed in supernatural investigations at his Bloomsbury rooms.

Haunted by the restless spirit of an Irish girl whose body is mysteriously washed ashore in a coffin, Yeats undertakes a perilous journey back to Ireland with his apprentice ghost-catcher Charles Adams to piece together the killer’s identity.

Surrounded by spies, occultists and Irish rebels, the two are led on a gripping journey along Ireland’s wild Atlantic coast, through the ruins of its abandoned estates, and into its darkest, most haunted corners.

Falling under the spell of dark forces, Yeats and his ghost-catcher come dangerously close to crossing the invisible line that divides the living from the dead.

Poets, politics, the paranormal, this book has it all.

After the success of his first novel Disappeared, Anthony Quinn returns to Ireland with new title The Blood Dimmed Tide, only this time it is to an Ireland heading towards the end of the First World War, when the country is striving for separation from Britain, the Anglo-Irish aristocrats are abandoning their great homes to flee to England, and Irish prisoners destined for execution are instead being returned to their home.

As someone who doesn’t usually read historical crime, and given the alternative first/third person narrative of the story I felt it took me a little longer to become gripped by the story than I am used too, but once I was hooked I was hooked. With its myriad themes and characters there is something in here for everyone.

I also enjoyed the setting and felt that the Ireland envisioned in the tale is almost a character in itself. Quinn is adept at creating haunting and atmospheric visions of Ireland at this time, which I felt really enhanced the supernatural feel and mysteriousness of the tale.

The Blood Dimmed Tide has been billed as the first in a series of three historical novels set around WW1 and The War of Independence, and it has certainly sparked an interest in me around this period in history, so I’ll be looking out for more from Mr Quinn.