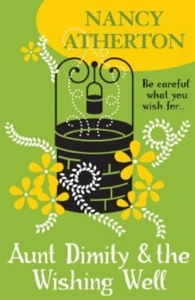 The sleepy Cotswold village of Finch is filled with curiosity when young Australian Jack MacBride arrives to wrap up his late uncle’s affairs, but when Lori Shepherd volunteers to help Jack clear out his uncle’s overgrown garden, they discover something even more surprising.

After making a wish in the newly uncovered well, Lori is later baffled to find it seems to have come true, and as word of this granted wish spreads though the village, locals begin to turn out in droves in order to make their own wishes.

The village soon descends into chaos however, as one man’s wish can be another’s worst nightmare, and it’s up to Lori, together with some otherworldly help from Aunt Dimity, to find out what is really going on.

One of the great things about bookbridgr from Headline is that it is a brilliant way of discovering new authors. You could have knocked me down with a feather when I discovered Aunt Dimity and the Wishing Well was actually the 19th book in its series, as it was one I had never heard of before and I love cosy crime mysteries and suspense novels.

I personally felt that Aunt Dimity and the Wishing Well falls somewhere between two of my favourite writers MC Beaton and Paul Magrs, so if you enjoy either of them you will love these. It was a thrilling read with an intriguing supernatural side that will keep you turning pages until you suddenly realise that several hours have passed, and you’ve been unable to put the book down.

It has charming, well thought through characters, and an enchanting setting. As someone who lives on the outskirts of the Cotswolds and likes to visit villages much like the fictional Finch it’s well drawn. I also found that I had no need to have read any of the previous 18 novels in order to enjoy this one. To me, Aunt Dimity and the Wishing Well was a delightful tale that left me feeling light-hearted and with a pleasant smile on my face as I closed the book. By the time I have sourced the rest of these novels, as I now surely must, my book shelves will be groaning! 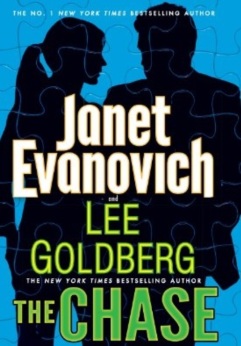 The Fox and the Hare are back and the chase is on!

The newest target for the FBI’s secret odd couple is Carter Grove, the ruthless leader of a private security company who has stolen a rare Chinese artifact from the Smithsonian, an artefact whose theft was covered up and one the Chinese now want back.

In order to avoid an international incident should the truth come to light, Nick and Kate must operate under the radar in order to steal the piece back. As the chase for the artifact moves rapidly around the globe from Washington DC, to Shanghai and even to the Highlands of Scotland the heat is on to prove no one can outsmart Fox and O’Hare.

The Chase is another glorious riot of a romp from Evanovich and Goldberg, that left me wondering exactly what it is I like most about these books.

I’m not sure if it is the spirit and fun of the “will they? won’t they?” (of course they will) relationship, the audacity of the cons they pull, the pure escapism of the plots, or the breakneck pace of the novel which caused me to delightedly tear through the book in a matter of hours. One thing I do know is that these books deliver pages and pages of fun.

With a cast of wacky, yet bizarrely believable characters, its cheeky style, range of humour, and fabulous sense of adventure I think that this is going to be another winning series for both Evanovich and Goldberg. Certainly from my point of view, as I for one am already looking forward to more impressive cons, thrilling takedowns and the next adventure from this deceptive duo. 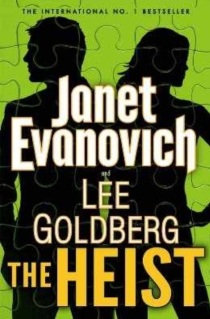 Since it’s impossible to review a new book by Janet Evanovich without mentioning Stephanie Plum, I won’t bother to try, I will simply say that Kate O’Hare is about as un-Plum like as you can get, but she is a character that is just as much, if not more, fun and addictive.

The Hare and the Fox.

Kate O’Hare is a FBI agent who has made it her career to chase down notorious con artist Nicholas Fox.  She is smart, sassy, supremely capable, oh and also an ex Navy SEAL. (Cue some artistic license from the authors here, who note at the beginning of the book that there is no such thing as a female Navy SEAL, although there should be.)

Nicholas Fox is highly intelligent, handsome and charm personified.  All traits which have enabled him to become so succesful at his ‘cons’ and to evade capture for years, until now that is.

Now she’s got her man, but he doesn’t want to be caught and instead makes a deal with the FBI to work alongside O’Hare to capture a corrupt investment banker, as long as they don’t kill each other first.

One thing I did find was that given Lee Goldberg’s history in writing TV shows, I found myself often comparing the relationship between Fox and O’ Hare with various TV partnerships, of which the one that sprang to mind most often was the tempestuous relationship between Cybil Shephard and Bruce Willis in the 1980’s show Moonlighting.

The Heist is an absolutely delightful book to pick up and read, with its fantastic verbal sparring, mad cap moments and emotionally charged relationship. Following the adventurous duo through exotic lands and pirate waters The Heist proves it is what all Evanovich books are….  The perfect piece of escapism from the everyday grind.

It is also a book you certainly won’t want to put down so when you sit down to read, make sure you are curled up in your favourite chair and plan to be there for a while. 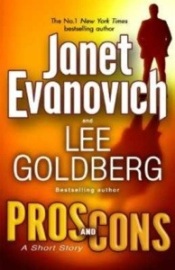 Want more of an introduction to O’Hare and Fox? Long standing Evanovich fan who wants to see how this new pairing compares to Stephanie Plum? Never read an Evanovich or Goldberg book before? Just want more?

Then as a bonus addition to the series, grab your Kindle or Kindle App and download Pros and Cons, a short story prequel to The Heist.