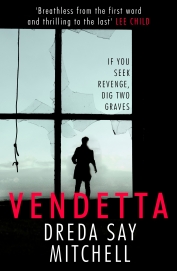 Mac wakes in an smashed-up hotel room with no recollection of what has happened. With his lover’s corpse in the bathroom and the evidence suggesting that he killed her, Mac is on a mission to uncover the truth and find the real killer.

But he’s in a race against time with less than a day to unravel the mystery. Still reeling from a personal tragedy Mac isn’t afraid of pain. Hot on his heels is tenacious Detective Inspector Rio Wray. Double-crossed and in the line of fire, Mac has to swim through a sea of lies to get to the truth.

But only Mac knows he’s been living a double life. Can he be sure he doesn’t have the blood of a dead woman on his hands?

In a big change in direction from her usual London gangland novels Vendetta is a race against time thriller and it’s a gripping one at that.  The hook is there immediately as Vendetta has one of the best openings I have read in some time, and you really get a feel for the pain, grogginess and sense of confusion that Mac is going through as he struggles to come to and work out where he is.

From there on in the action and the questions come thick and fast, as Mac has less than a day to discover the truth behind who killed his girlfriend and why.  As both sides of his double life are revealed, more and more conspirators are added to the mix, the plot thickens, the tension increases and your ability to put the book down will disappear.

It’s a cracking read with genuinely believable characters from troubled Mac, to feisty DI Rio Wray and to those he works for on both sides of his life. There’s plenty of legs in these guys too so I’m looking forward to hearing more…

Vendetta is out today.  Click on the image above to get your copy.