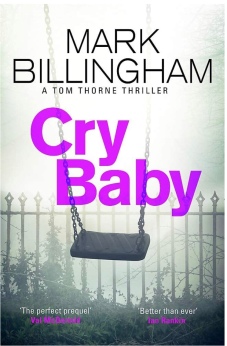 It’s 1996. Detective Sergeant Tom Thorne is a haunted man. Haunted by the moment he ignored his instinct about a suspect, by the horrific crime that followed and by the memories that come day and night, in sunshine and shadow.

So when seven-year-old Kieron Coyne goes missing while playing in the woods with his best friend, Thorne vows he will not make the same mistake again. Cannot.

The solitary witness. The strange neighbour. The friendly teacher. All are in Thorne’s sights.

This case will be the making of him . . . or the breaking.

17 books into the series and I’m still loving the ‘grumpy old sod’ Tom Thorne as a character, alongside his well established colleagues and annoying ‘brass’.  Once again Billingham has put a new spin on him though.  This time taking him back to 1996, to before the time of Thorne’s first appliance in Sleepyhead, where he was already a traumatised copper, but who now had to face all the emotional demons that helped send him on his path.

Being a prequel, it’s easy to pick up and read if you’ve never read Mark Billingham’s Thorne novels before, but that said knowing what I know about the characters later on in the series many of their actions and thoughts about each other did send a chuckle through my bones.

Give it a try, I certainly don’t think you’ll regret it.