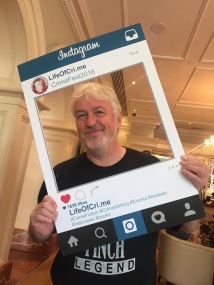 Paul Finch studied History at Goldsmiths, London, before becoming a cop in the north west of England. He then let his passion for writing allow him to follow a career in journalism. Now a full time writer, he first cut his literary teeth penning episodes of the British TV crime drama, THE BILL, and has written extensively in the field of children’s animation. However, he is probably best known for his work in thrillers and horrors.

Today as part of the LifeOfCri.me Theakstons Crime countdown he’s taking on our 12 word challenge.

LOC: Your latest release Ashes to Ashes is your sixth book to feature Detective Mark ‘Heck’ Heckenburg, what can you tell us about it?

PF: It is the darkest and most violent of the hecks to date

LOC: You are particularly evil to your protagonist, regularly putting him through the mill, why?

PF: I believe that personal jeopardy is intrinsic to a good crime thriller

LOC: How would you describe your writing process?

PF: A bit haphazard, but it seems to get the job done

LOC: What’s the most surprising thing you’ve learnt in your writing career?

PF: Because my writing matters to me, that does not mean it matters

LOC: What words of wisdom do you have for aspiring authors?

PF: Pay attention to your rejections, and make sure you learn from them

PF: The Cartel by Don Winslow

PF: The ultimate account of a lone cops war against organised crime

LOC: Thanks to the author Angela Marsons you’ve just woken up on stage in front of the judges of Britain’s Got Talent, with only an ironing board, a box of matches and an armadillo. What do you do?

PF: Warm the armadillo’s feet (through the board), to check out his moves.

John Sagan is a forgettable man. You could pass him in the street and not realise he’s there. But then, that’s why he’s so dangerous.

A torturer for hire, Sagan has terrorised – and mutilated – countless victims. And now he’s on the move. DS Mark ‘Heck’ Heckenburg must chase the trail, even when it leads him to his hometown of Bradburn – a place he never thought he’d set foot in again.

But Sagan isn’t the only problem. Bradburn is being terrorised by a lone killer who burns his victims to death. And with the victims chosen at random, no-one knows who will be next. Least of all Heck…