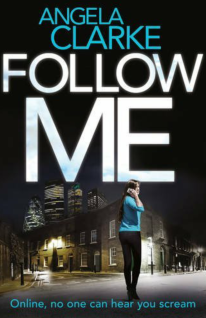 The ‘Hashtag Murderer’ posts chilling cryptic clues online, pointing to their next target. Taunting the police. Enthralling the press. Capturing the public’s imagination.

But this is no virtual threat.

As the number of his followers rises, so does the body count.

Eight years ago two young girls did something unforgivable. Now ambitious police officer Nasreen and investigative journalist Freddie are thrown together again in a desperate struggle to catch this cunning, fame-crazed killer. But can they stay one step ahead of him? And can they escape their own past?

ONLINE, NO ONE CAN HEAR YOU SCREAM …

Still living the student life, years after finishing university, Freddie Venton scrapes by in the world by sleeping on the sofa in the lounge of her shared accommodation and working at Espress-oh coffee. She dreams of being a full time journalist, but is resigned to writing free web copy on student life for ‘The Family Paper’.

After a run in with her annoyingly chipper, all round company man and Espress-oh manger Dan, Freddie has a chance encounter with ex-school friend, Nasreen Cudmore, and as her journalistic insights kick in, she ends up finding herself dressed as a forensics expert and stranded in the middle of a brutal murder scene.

I have to say picked up Follow Me on a bit of a whim, due to its bargain 99p Amazon price tag, and I’m glad I did, I absolutely bloody loved it.

I really enjoyed the realistic way the twitter followers of the #Murderer are depicted, at first joining in with the ‘game’ and then turning when they realise the horror of what is actually happening, the whole playing out of the crimes on social media was brilliantly done, meaning even those readers who don’t ‘get’ / use the various platforms will be able to follow the whole tale.

One of my favourite parts was the way that each of the chapters was entitled with a popular piece of text speak and its explanation, and perfectly summed up the action to follow.  Put together with the way Freddie talks to herself in headline asides, Follow Me is a gripping read that successfully deals with terrible events, without going over the top and becoming too dark for many readers.

Freddie Venton is a great character, feisty, go getting, determined to succeed, and yet staying grounded by the very real devastation being caused all around her.  Her ex-schoolfriend Nasreen is far more straight-laced, and down the line desperately trying to succeed.  I didn’t really warm to her character initially, but as the back story of what happened between them eight years before unfolds I began to change my mind.  I’m certainly hoping we get to hear more from Freddie in the future.