Reykjavik in November is dark. That’s probably the first thing you notice. I’m used to getting up before it’s properly light, but usually the dawn starts to spread as I take the dogs out, check the livestock and get my breakfast. Here the blackness is total as the alarm goes off, still pitch over coffee and bacon, and treacherous on the walk from Hotel Holt to the Nordic House across a bog of noisy ducks and sulphurous smells.

And yet somehow I don’t mind. I’m here for the second Iceland Noir, the newest kid on the crime fiction festival block and fast becoming one of my favourites. The festival has grown, now filling two days with panels and signings rather than just one. It’s still organised by the tireless Quentin Bates, Ragnar Jónasson and Yrsa Sigurðardóttir, aided this year by Lilja Sigurðardóttir. And what a great show they put on for us.

As might be expected from a crime fiction festival set in Iceland, the influence of Nordic writers and writing featured in many panels.  Topics included Nordic Influences, Works in Translation and my favourite (perhaps biased here) Is Scotland Nordic? (answer – no). All the panels were well attended and the discussions lively. I would liked to have attended them all – something that would have been possible as they are run one after the other and with enough time in between to have a quick coffee (and pop outside for that rare glimpse of daylight). Alas, technology had other ideas and I missed several re-recording a lunchtime interview after the German journalist’s mini disc recorder decided it didn’t like what I was saying. 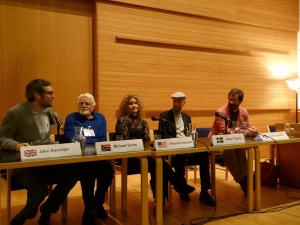 Perhaps the best thing about Iceland Noir though is not the panels but the time between them, when everyone mingles outside the hall, chatting about books, Reykjavik, the endless darkness and a hundred hundred other things. English is the default language, which I find rather humbling. Plenty of Brits make the journey over the North Atlantic – this year’s UK writers included (in no particular order) Peter James, Zoe Sharp, Michael Ridpath, David Hewson, Craig Robertson, Louise Millar, Sarah Ward, Mari Hannah, Susan Moody,  and William Ryan – but there was notable home grown talent from Ragnar and the two Sigurðardóttirs, Solveig Palsdottir, Viktor Arnor Ingolfsson and many more whose names stretch my ability to find strange letters on the keyboard. This year saw Swedish author Johan Theorin make the journey, along with Finland’s Antti Tuomainen and Norway’s Vidar Sundstol, and ex-pat American David Swatling came over from Amsterdam with his fascinating tale Calvin’s Head. Truly Iceland is a meeting place of nations.

In addition to the panels, there were a couple of crime writing workshops hosted by William Ryan, and a Reykjavik Crimewalk, guided by Úlfhildur Dagsdóttir, which sadly I missed but everyone seemed to enjoy. Saturday evening everyone piled into an exclusive restaurant housed in an old theatre building for the festival dinner, topped off by a topical crime quiz in which, inevitably, the winning team cheated. It was all very good-natured though, as seems to be the way when a bunch of crime fiction authors and readers get together.

And so the festival closed. Or at least it would have done had not Yrsa Sigurðardóttir organised a coach trip on the Sunday, out to the Snaesfellnes peninsula to visit the places that had inspired her novel ‘My Soul to Take’. The weather (and light) seemed against us as we set off, but magically the clouds rose and the sun came out as we reached the village of Arnastapi. A quick leg-stretch and cliff-top walk, then on to Hellnar. The cloud was still too low to see the glacier, so instead we were taken to a series of volcanic caves straight out of Jules Verne’s epic Journey to the Centre of the Earth. If only we could have come out at Stromboli and not into a chilly arctic wind.

Iceland Noir has grown from its initial start last year, but retains its cosiness and relaxed atmosphere. Sadly it won’t be on in 2015, relinquishing its date in an ever more filled calendar for Shetland Noir. It will be back in 2016 though, and so will I. Even in the darkness Iceland is still a wonderful place.