Saturday April 2nd 2016 saw the latest outing for the crime fiction festival that is Deal Noir. It’s a day that draws together many of the most popular names in crime writing.  This year scandi-brit writer Quentin Bates, author of the Officer Gunnhildur novels set it Iceland, put together his view of the day for LifeOfCri.me 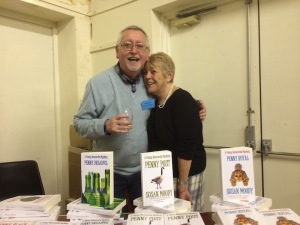 This was the second Deal Noir. Last year’s initial effort went well, and this time it was even better. It’s the brainchild of Susan Moody and Mike Linane, both well known to those who know their crime stuff, and between them they have come up with something that was a great day by the Kent seaside with a suitably murderous flavour to it.

It’s a small festival, just one day, but not far from being perfect as it flashed by and.. what was that? It’s all over? Already?

Deal Noir takes place at the Landmark Centre, a former church that has been turned into an arts centre and much else, with a bar attached and space outside for the puffers to congregate in comfort. The place has atmosphere to it, with the panel staking place to a backdrop of stained glass windows and under a vaulted roof.

Susan and Mike brought everyone together for wine the evening before the big day, providing the opportunity for all the introductions and meetings of old friends before Saturday’s serious business. It was just as well. I found I’d feasted on haddock and chips right next to Matt Johnson half an hour earlier without realising it was him until our paths crossed at the Landmark. He noticed, but then he’s a detective and probably has more practice than most of us in spotting dubious types. 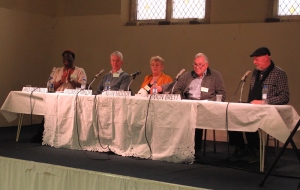 Thirty writers kicked off a series of panels early on Saturday, possibly too early for some, as Susan made the introductions.

‘Last year we were like a young couple, jubilant at the thought of being parents for the first time, but at the same time worried to death in case we were found wanting. But we weren’t! The word spread rapidly.  Deal Noir was mega!’ she said in her opening words.

‘This year, it’s been super-mega. Fantastic panels, appreciative audiences, top moderators and an organisation as smooth as a blood-slick,’ she said when I asked afterwards for a verdict on how it had all gone. ‘Given the quality of writers we featured, that’s not surprising. Come next year, and see for yourself.’

Shepherded into place by mistress of ceremonies Janet Laurence, panels ticked by like clockwork. Anyone unfamiliar with what crimewriters are like when they frolic in the natural habitat (which generally has a bar somewhere fairly close) would imagine that a crime festival would be a morose affair. Think again. There wasn’t a panel that didn’t raise a laugh or six that could be hard three streets away by the beach.

There were first-time novelists such as Alison Baillie, Simon Booker, Susi Holliday and Sarah Ward being grilled by Andy Lawrence on their path to publishing, some coming to it as innocents who didn’t know what a blog was but took to the whole thing like a natural (Alison) and some from a background in screenwriting (Simon).

There was no shortage of writers with a long backlist of writing, such as John Harvey and Simon Brett, each with their unique take on the business of writing and the headaches that go with writing series fiction, Incidentally, Simon Brett recommended a fifteen-year break in the middle of a series, and said that writing a standalone novel is reminiscent of a sorbet at an Edwardian banquet, while Andrew Taylor made the point that his work stretches increasingly further back in time, currently to the eighteenth century when there were no police and no concept of investigating a murder. John Harvey bemoaned his lack of organisation in the early stages of his Resnick series when he failed to note who was whose husband and which character had red hair – giving him no choice but to go back and read his own books to get the details right.

International flavour came from Yrsa Sigurðardóttir from Iceland, Edward Wilson an American former intelligence officer long resident in Britain, Piergiorgio Pulixi from Sardinia and William Ryan who hails from Ireland but sets much of his fiction to the backdrop of Stalin’s terror in the 1930s.

Alison Joseph’s Leading Ladies panel brought together Elly Griffiths, Elizabeth Haynes, Sarah Hilary and Alex Marwood as they spilled the beans on some of the inside information of where their fiction has its dark origins, and then it was time to wrap up and award a couple of prizes before it was all over.

‘I can’t believe this started as a tweet,’ Yrsa said as she read out the best entries for the best modern proverb. ‘We have Icelandic proverbs that are about your sword not being long enough and in English there are lots of proverbs about baskets that don’t relate to modern life… so it’s time for some new ones.’

‘The flight you’re late for is the one that leaves on time,’ ‘as lost as a fart in a jacuzzi’ and ‘Never judge a person by their child’s name’ all received honourable mentions, but the prize (seven of Yrsa’s books, signed) went to Linda Lawlor for:

The flash fiction prize went to Ruth King for her magnificently chilling entry, No Means No

‘She had never reported the assault. But, she remembered the pain of the pebbles against her back, and his face above her.

Immobilised by cable tie handcuffs, his guilty pleasure turns to panic as she removes her wig, slips the bag over his head and whispers

And with that, it was time to shoo the assembled crime aficionados into the next room for more wine before letting them loose on the streets of Deal once again. Will I be there next year? Absolutely.

‘We’re thrilled and delighted at the success of this year’s Deal Noir and especially to see that all the improvements to last year’s event worked and were appreciated,’ said an exhausted Mike Linane with a well deserved glass in his hand. ‘Massive thanks must go to all of the authors and moderators who took part and to the very receptive audience. We are already working on idea to make next years Deal Noir ever better – watch this space!’